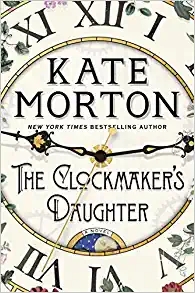 I am a huge fan of Kate Morton and was lucky to have been able to meet her when I attended Book Expo US last year. She signed an ARC of The Clockmaker’s Daughter and I am thrilled to have it.  Meeting this Australian born writer and briefly chatting with her was a delightful experience. I have listened to all of Kate Morton’s books on audio so I was looking forward to listening to this one and Joanne Froggatt’s narration was enjoyable. I recently finished it but have been putting off writing my review because I was disappointed in this one.

The story, as with all of Kate’s books, goes back and forth between the present and the past. It begins when archivist Elodie Winslow finds a leather satchel with an old photograph and sketchbook from the mid 1800s, while working at her job. Something is familiar about the photograph and she feels a strange connection to it and the sketchbook/journal, so she begins to investigate. She discovers that the satchel belonged to a painter named Edward Radcliffe who owned a home on the Upper Thames named Birchfield Manor.

Edward, who was engaged to someone else, had a muse named Lily Minnington.  During the summer of  1862, Edward, Lily, his little sister, Lucy, and a group of bohemian artists descended on Birchfield Manor where they planned to spend a summer painting but tragedy struck. Lucy idolized her brother and part of the story is told from her point of view. Lucy plays a big part in what happened that summer at Birchfield Manor. Who was Lily Minnington really and what is the connection that Elodie had to this story and what happened that fateful day in 1862? It will all be explained but getting to that explanation was circuitous and complicated.

Kate is a skilled writer and she really brought the time periods alive and her attention to detail is amazing. It is difficult to review this book without spoilers ant it has a complicated plot spanning multiple time periods. There are so many characters, plot threads and multiple voices across the time periods that I often found myself lost, trying to figure out who that character was. Maybe part of this was because I listened to it on audio and had gaps in my listening time. The theme of everyone gathered at a manor where a murder took place is reminiscent of her excellent first novel, The House at Riverton (The Shifting Fog for UK readers).

Kate Morton is an award winning New York Times bestselling author and I look forward to her next book even though I was disappointed in The Clockmaker’s Daughter.