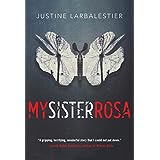 Che Taylor has just moved to New York City with his parents and younger sister, Rosa. They have moved around a lot and he wants to be home in Australia and not living in New York City. He especially doesn’t want to celebrate his seventeenth birthday in New York without his friends. His sister, Rosa, is a ten- year old charmer with golden ringlets and dimples. Everyone who meets Rosa is beguiled by her. Che is close to his sister because he was in the room when the midwife delivered her and he has always tried to protect her. But Che knows something about Rosa that no one else will admit: she is a psychopath.

Because their parents are always working, Che has been responsible for Rosa since she was a baby. He isn’t fooled by her and loves her fiercely, but he is also a little afraid of her. Rosa is callous, charming, cunning, manipulative and has no empathy. She is also a liar and likes to kill things. When she was little, their parents realized that Rosa had some problems and they carted her off to various doctors who were charmed by Rosa, too. She can turn the charm on and off at will. Now their parents think that she is fine but on Che’s list of things to do, “Keeping Rosa Under Control” is number one on his list. Che has tried to talk to his parents about Rosa but they don’t believe him and won’t talk about it.

Che is a boxer and at a local gym he meets Sid, a beautiful girl, who is also a boxer. He falls for her in a big way. Rosa realizes this and soon she has charmed her way into his circle of friends. As Rosa continues with her sadistic, complex and disturbing games, the reader knows that something is going to happen and it won’t be good.

This suspenseful and chilling Young Adult read has something for everyone. It has diverse characters, plot twists, a teenage boy experiencing his first love and a psychopathic ten-year-old who makes us wonder when she will strike next. The author does a fantastic job of giving the reader clues without telling us what is going to happen. The ending will shock you. I couldn’t stop reading this book and if you like compelling, psychological thrillers, you will love My Sister Rosa, too!
Recommended for Grades 9-up because of sexuality and mature themes.

Similar Titles: We Were Liars by E. Lockhart,  With Malice by Eileen Cook

book reviews and all things bookish

Our father David reads a lot, so we post his reviews of notable books

The Best of Crime, Mystery, and Thrillers

A daily selection of the best content published on WordPress, collected for you by humans who love to read.

The best of the literary web

BookPage | Discover your next great book!

Joe of all Trades

The latest news on WordPress.com and the WordPress community.