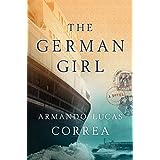 by Armando Lucas Correa
World War II has been a popular subject in fiction over the past couple of years. I have read many of these books but The German Girl covered a topic that I wasn’t familiar with despite all of the books about Nazi Germany that I have read.
It is 1939 Berlin and twelve- year- old  Hannah Rosenthal and her family are wealthy upper class Germans who have always been admired by everyone. But things are changing now that the Nazi Party is in charge.  Suddenly Hannah and her family are now “unclean” because they are Jewish. Even the residents of the apartment building that the Rosenthals own will not speak to them. Hannah and her best friend, Leo Martin, spend their days sneaking around the city trying to avoid the “ogres” who are everywhere. Blond, blue- eyed Hannah could pass for a non Jewish girl and one day, while she and Leo are out in the city, a photographer takes her picture and posts it on the cover of a magazine. They call her The German Girl. Hannah’s parents are upset about this because it brings unwanted attention to them. As the situation worsens, Hannah and Leo begin to realize that their life, as they knew it in Berlin, is over.  Soon their parents are making plans to escape the city.
The German ship, the SS Saint Louis, will take passengers, who can afford the passage and can acquire visas, to Cuba. From there, many Jewish people wait to get permission to go to the United States and other countries. Hannah and Leo,  their families and over 900 other Jewish people board the Saint Louis to travel to Cuba. Aboard ship, the German captain, Gustav Schroder, demands that his German staff treat the Jewish passengers with respect.  On the ship, Leo and Hannah can at least be children as they play and explore the ship. They vow that they will always be together. When the ship arrives in Cuba, the Cuban government decides that only a few passengers can disembark and the rest are turned away.The captain of the Saint Louis leaves the port and tries to find a place for the passengers who were refused entry.
Decades later on her eleventh birthday, Anna Rosen, who lives in New York City, receives a package from Cuba and her Great Aunt Hannah. Great Aunt Hannah raised the father that she never knew.  Anna and her mother travel to Cuba to meet eighty-seven year old Hannah and the reader will discover what happened in 1939 to the other passengers on the Saint Louis.
This book is a debut effort by the author and it is a good one. It is told from the perspective of two young girls. My only criticism of this book is that I felt like the voices of  Hannah and Anna were too adult for their ages. I didn\’t know anything about the SS Saint Louis and the part that it and Cuba played during this time period and this made the book different from the others that I have read about this time in history. At the end of the book, the author fills us in on what happened to the captain and the real passengers on the SS. Saint Louis.  He also lists the people who were on the ship. It is a nice tribute to this heartbreaking time in history.
Thanks to NetGalley and the publisher for providing me with an advanced reading copy of this book to review.

book reviews and all things bookish

Our father David reads a lot, so we post his reviews of notable books

The Best of Crime, Mystery, and Thrillers

A daily selection of the best content published on WordPress, collected for you by humans who love to read.

The best of the literary web

BookPage | Discover your next great book!

Joe of all Trades

The latest news on WordPress.com and the WordPress community.